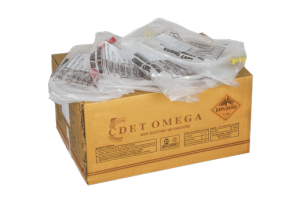 Shock tube detonators are non-electric explosive initiators. A small-diameter, hollow plastic tube of any desired length, in which a tiny amount of explosive powder is adhered to, on its inner surface, is affixed with a delay detonator at one or both ends. On initiation at one end, the explosive powder in the shock tube generates a shock wave which propagates through the length of the tube and initiates the detonator at the other end. The outer surface of the tube remains unaffected by the travelling shockwave.

Shock tube detonators are less sensitive to static electricity and radio frequency energy and are thus, a safer alternative to electric detonators. They are also considered superior to detonating cord as they produce less sound and are safer to handle and store.

OMEGA DTHD is used for true bottom initiation of the bore hole in blasting. OMEGA DTHD can be used in combination with Surface Trunk Line Delay Detonator (STLD) and it provides unlimited delay periods and sequences to conduct large scale blasts. OMEGA DTHD can be used with detonating cord and cord relay also, using the DF con-nector provided. The higher delay timing of DTHD enables blasting the first borehole when the surface initiation is completed or far off from the first blasthole. This helps in eliminating the shock tube cut-off on the surface due to the fly rock from the first hole. OMEGA DTHD can be used for multideck initiation in boreholes to reduce the ground vibrations in sensitive areas, inhabited areas and in controlled blasting operations.

OMEGA STLD is used for surface initiation in blasting to provide the necessary delay between the holes. A Delay Detonator of No. 6 strength is housed in a suitable connector on one end and the other side of the tube is sealed. The Connector has the provision to con-nect 6 Shock Tubes for initiation. The connectors are colour coded to indicate the delay timing. OMEGA STLD is used in combination with Down the Hole Delay detonator (DTHD).

OMEGA DUALDET is a combination of both DTHD and STLD in one set. One end of the shock tube is crimped with DTHD and the other end is crimped with STLD. Thus, Dualdet is useful for down the hole delay initiation and also surface initiation in the blast. Dualdet is useful in those mines where the drilling and charge loading patterns are fixed. This reduces the wastage of shock tube in the usage of DTHD and STLD separately. Dualdets are manufactured with the combination of timings of DTHD & STLD as per the customer’s order.

CDET OMEGA MS series is a non-electric short delay detonator system available from Nos. 0 to 20. It is mainly used in small bench blasting operations on surface and underground, as well as in underwater blasting and sub-level caving.

CDET OMEGA LP series is a long delay system available from Nos. 0 to 25. It is designed for tunnel blasting and other underground applications. The longer delays between the period numbers are designed to give time for the rock to break and move in the constricted tunnel blasts.