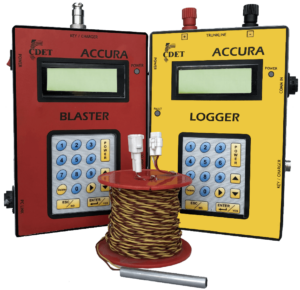 CDET ACCURA belongs to the new generation of Explosives Initiation System. Integrated with micro electronics, it provides a much superior system to the conventional detonator which uses chemical delay technology. It was designed with insight of mining conditions and user requirements. It provides extreme planning flexibility, blast accuracy and operational safety and the blasting output leaves conventional chemical delay detonators far behind in comparison.

CDET ACCURA allows users to safely and easily programme delays on-site for each detonator and conduct self- diagnosis and real-time corrections of detonator timings before blasts to obtain previously unimaginable blasting results. The system also has tamper proof and multiple built in fail-safes features for added safety and security.

Accura Detonators come attached with down the hole and surface wire harness with polarity-reversal proof plastic connectors which are water proof and dust proof once connected. The timing can be set in multiple ways :

Each Detonator has a programmed unique identity number which is printed on the attached tag. The detonator assembly is water tight and the electronic circuit is well protected against shocks and stray / static currents.

The Smart Timer Chip inside the detonator receives it’s instructions from the proprietary Programming Logger. The electronic circuit allows the user to diagnose the connectivity of each connected detonator before firing. After priming, the chip receives it’s arming and firing command only after running through more fail-safes from the Blaster. Any timing corrections or disarming can be done before issuing the firing command. The smart detonator also automatically disarms and enters sleep mode if firing command is not received within a set time interval due to any reason. The detonators are suitable to use in demanding situations including multi-day sleeping in explosive charged boreholes.

CDET ACCURA is a secure explosive initiation system due to it’s unresponsiveness to non authorized access. It is ideal for deployment in security sensitive environments that may prevail in certain geographic locations. It is resistant to any accidental and unauthorized initiation by being operable and initiable only with it’s proprietary hardware Logger & Blaster with programmable firing codes. The detonator resist initiation even when exposed to direct High Voltage AC Current through it’s lead wires.

The Logger is a user friendly hand-held programmer for use with the Accura Detonator. It has terminals for attaching the lead wires of detonators or trunk lines, power switch, rechargeable built-in batteries which can be recharged with provided power adapter, large user- friendly keypad and LCD screen and communication ports. A Logger can be attached up to 4 other Loggers in daisy-chain. Any Logger in the chain can be used as a firing control point by attaching the Blaster to it.

As each detonator is connected to the Logger, either individually before priming or all together after priming, the Logger identifies each detonator using its hardware-id and is used to set the desired delay time to the detonator. It can also be used to assign a delay number in case the detonator contains factory programmed time intervals. It can store up to 5 pre-programmed blast patterns which can be made on a PC for rapid programming on-field. The Logger checks the integrity of the electronic circuit using 2-way communication protocol on demand and before firing and displays the status to the operator. After issuing the firing command, it also confirms that the firing command was received by all connected detonators.

The Logger itself cannot fire a detonator intentionally or accidentally even if it develops faults, due to the inherent safety feature that a Tagger does not produce voltage above the no-fire voltage of the fuse-head. The Tagger itself does not contain the arming and firing codes.  The Logger can also electronically disconnect multiple detonators from a sequence from the blast connection before firing.

A single logger supports up to 100 detonator connections. One tagger can support all detonator modes—fully programmable , factory programmed or numbered mode.

The Blaster is a hand-held device that provides the firing current / voltage and the digital firing codes to the detonators through the Loggers. It contains communication ports, power switch, rechargeable built-in batteries which can be recharged with the provided power adapter, large user- friendly keypad and LCD screen. A Blaster is essential to firing the Accura Detonators.

The Blaster needs to be connected to any one Logger using the provided data cable to communicate with all the connected Loggers and Detonators. it provides the firing command and voltage to the detonators through the synchronized Loggers simultaneously. The Blaster’s firing command can be locked by a user passcode which will be required before every blast. The Blaster displays any errors before the blast using a pre-blast check at a centralized screen.

A blaster can support up to 4 Loggers at a time and can fire 4 x 100 (400 detonators) simultaneously.